Shutdown of Foreclosure Mills Gives New opportunity to Their Victims

Quiet Your Title...Against Any of These EIGHT Foreclosure Mills

If you are currently in foreclosure and your loan is being processed by one of the following foreclosure mills:
1.  David Stern
2.  Marshall C. Watson
3.  Shapiro & Fishman
4.  Florida Default Law Group
5.  Kahane & Associates,
6.  Daniel C. Consuegra
7.  Albertelli Law and
8.  Ben-Ezra & Katz.
The principals have started shutting down these firms because of the Robo-signing scandals. This provides a unique opportunity for foreclosure victims of these firms to quiet title in their own names.

Victims of these firms should find out what complaints the Attorney General has submitted against the firm in question, then serve the court with Mandatory Judicial Notice of that AG complaint.  The court will naturally doubt the validity of the Plaintiff's documents.  When the Plaintiff to prove validity, defendants can move for dismissal with prejudice, attorney fees and costs, and sanctions against the Plaintiff and the foreclosure mill's counsel.

If you want to know whether you can obtain such a dismissal, contact Randall Reder - reder at redersdigest dot com,  813 960 1952.  Dr. Reder can handle your case all the way through the appeals process if necessary.

Many facts justify asking the court to release the homeowner from obligation to pay the alleged lender, to reverse the purchase and mortgage, to disgorge all the funds, to find the lender guilty of fraud, to award treble damages to the alleged borrower, and quiet the title in favor of the homeowner.  Borrower/homeowners should investigate the facts and launch the attack against the lender and servicer before foreclosure ever happens, or after a dismissal, as above. 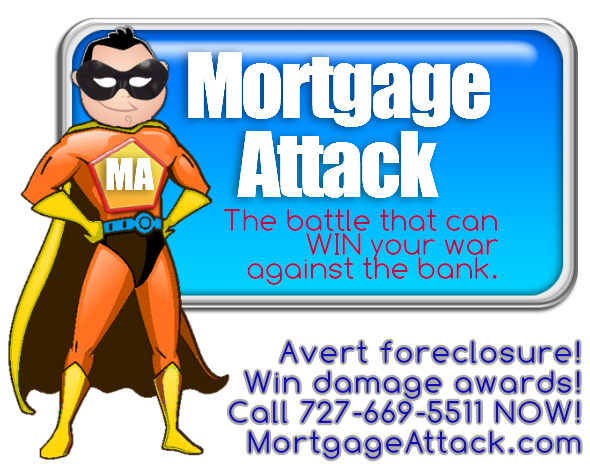 If you want to prove any of the above, contact Mortgage Attack, http://mortgageattack.com, 727 669 5511, purchase a mortgage examination, and you will have evidence that the lender and agents injured you at the inception or process of your mortgage.  You can use the evidence as "silver bullets" to convince judge and jury of the injuries.  And your attorney will receive guidance as needed to help him prevail in your case.  Here's proof of the methodology:


A Quiet Title action gives you the venue to air the above issues and getting the court to order removal of the servicer and everyone else from the deed.  Naturally, you will serve the attorney of record.  The foreclosure mill cannot handle the litigation for the reasons at the top of this message.  You move for default judgment if the attorney of record does not answer the complaint within 30 days. The court should grant title to the borrower, clear of any defect or claim by the lender.