Well, Obama could not very well set up a no fly zone before the Russians swooped in to help Assad because Obama worked for years (remember Hillary Clinton's Benghazi arms-to-ISIS treason?) to get rid of Assad by funding ISIS AND the rebels.

It's all about allowing or preventing a Qatar-to-Europe gas pipeline through Jordan, Syria, and Turkey.  That would compete against Russian gas, and cause a price collapse.  Russia won't allow it because US economic sanctions (including lowering of oil prices) to punish Russia for taking the Crimean peninsua have hurt Russia.

Naturally, the US wants to help Qatar (where the US maintains a critically important air base for flying drones to Yemen, Iran, etc), so together the US and the Arabs have funded the so-called rebels (who did a poor job against Assad) and then funded ISIS (who did a pretty good job and sold $800 billion in oil to Turkey).

That put the US into direct opposition against Russian interests, so naturally Russia stepped in and creamed the oil truck fleet, destroyed as many rebel groups as they could, and took out some ISIS bad guys in the process.  That's what the US could have done, had it allied with Assad.  But of course, that would have alienated Qatar, and bye-bye air base in Qatar as a result.

Maybe the Joint Chiefs have hunkered down with our supreme commander to plan sending in F35 Lightning II's and F15 Strike Eagles and F/A18 Super Hornets and F22 Raptors to obliterate that Russian S-400 radar and missile system and the aircraft defending it.

And maybe the USA will back off the way it should have long ago.  At least our supreme commander can tell Qatar "Hey, if you want to go in and take out that missile system, have at it.  Let us know when you've eliminated it and we can pick up where we left off.  Otherwise, I've got to make Tee time."
--

Equal before the law? Stupid.

I'd like also to point out the stupidity of the consideration that all people are or should be equal before the law.

The stupid, having IQ so low they cannot graduate from high school, notoriously make stupid choices, which explains the term "stupid" in reference to them. They cannot compete for the better jobs and mates, and so they gravitate to crime and welfare abuse to get by.

That means the rest of society must support them or pay to defend against their criminal behavior. Bottom line: unsupervised, the stupid become criminals.

So it constitutes a crime against humanity to procreate a stupid child. Society could prevent that crime by outlawing knowing infliction of a debilitating disease (stupidity) on an innocent baby. That would justify sterilization of the stupid.

And since the stupid make stupid choices, of course they should not vote. Furthermore, the smart, making smarter decisions than the mediocre, should have more votes than the average. So the law should never allow universal suffrage, and the suffage it does allow should let the smart and educated and responsible and productive have more say than the non-so-smart, less educated, less responsible and productive.

One can easily make the case that the stupid and irresponsible, having the right to vote, have put criminals into government, and will do that to a greater extent as they increase as a percentage of the population.

Well, heck, how smart are the smart after all?

Dxtr, like me, loves the wind in his whiskers, adventure ahead, and history at his back.
Unlike me, he cares naught for future or history, let alone those of our planet and universe.
We both take joy in the journey, the ride up front, the pedal to the metal.
The destination, meanwhile, for all its importance, wallows in the back seat for its turn. 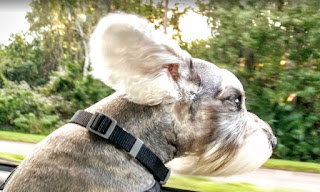 No, that is not a photo of a rabbit.

The 2 November 2015 US Supreme Court denial of certiorari in Tran v Bank of New York settled once-and-for-all the spurious assertion that borrowers can challenge putative violations of the Pooling and Servicing Agreement (PSA) creating a securitization trust.  Borrowers, encouraged by Glaski v BOA, a California appellate win for the borrower, have claimed that because New York Law voids assignment of a note into a trust after its closing date in the PSA, the assignee has no authority to enforce the note in a foreclosure effort.

This argument boils down to nothing more than a borrower's effort to use quirks in the law to get a "free house" by preventing foreclosure because the borrower did not make timely payments.  Bottom line the courts will not allow a borrower to get a free house unless the lender team injured the borrower sufficiently to justify it.

Numerous California courts have deprecated the Glaski opinion, as have other courts across the land.  Now the US Supreme Court has flicked its chin at it.

2.      Did not get injured by the PSA violation or assignment, and

3.      Receive no 3rd party benefits from the PSA or assignment.

Now, the SCOTUS has put the KIBOSH forever on the frivolous argument that the borrower can cite irregularities in obeying the PSA and assigning the note as a basis for stymieing a foreclosure.  I have presented full opinions of the relevant cases.  READ THEM.

If you want to know how to prove the lender team injured the borrower, and how the borrower can use that proof to win millions in compensatory and punitive damages, visit http://MortgageAttack.com.

Download this article with the above opinions embedded.  Distribute broadly.