Gobekli Tepe is a civilization site over 10,000 years old in Turkey right smack between the Tigris and Euphrates rivers, northern Mesopotamia.  Later inferiors, strangely, buried it. Excavations started in 1995, and multiple sites exist in the area. I and others have commented on its civilizational significance.

Here is another nearby

According to my favorite book, Adam and Eve arrived 38,000 years ago as biologic uplifters of humanity.  They settled in "the Garden of Eden" on a peninsula jutting out from the eastern coast of the Mediterranean Sea approximately due east of present day Cyprus, and since submerged due to tectonic plate shifts.  As the story goes they defaulted in their mission and an impending invasion by Nodites (yes, the same tribe from which Cain took himself a wife after running off in consequence of slaying his brother Abel) required them to leave for the second garden.  Gobekli Tepe is in the same general area, albeit a bit north.

While a lot has changed in terms of climate and tectonic plate shifts in the past 38,000 years, clearly a marvelously fertile valley lies immediately south of Gobekli Tepe. And it seems ideal as a Garden of Eden because it is surrounded by relatively inhospitable territory 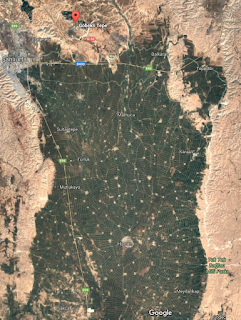 The Tigris and Euphrates rivers make natural boundaries to keep hostiles at bay, and they approach within 50 miles of each other in southeast Turkey at Hantepe (Tigris) and Konacik (Euphrates) about 50 miles north and a little east of Gobekli Tepe, and in the area of Baghdad, Iraq.   A very fertile area sits in eastern Syria, immediately 80 miles south of the northernmost approach of the two rivers to each other,  and in numerous area in between.  The star sits at Gobekli Tepe.  If it took Adam and Eve a year go travel 100 miles from the first Garden of Eden to the Euphrates river, it would have taken several years to reach the area of Baghdad, so I imagine they ventured northeast  another 60 or 80 miles to reach the site of the Second Garden site.  Gobekli Tepe's ruins seem to suggest the influence of superior beings like Adam and Eve and their progeny on the ancestry of those who created the civilization at Gobekli Tepe.  I'm guessing the apple did not fall far from the tree.  The line drawn in the image below shows the distance between the Tigris (right) and Euphrates (left) rivers.  The white line running left to right at the bottom is the border between Turkey (north) and Syria (south).  Based on the comments in The Urantia Book I'd guess the site of the second garden at the area south of Siverek because it is crisscrossed by numerous rivers, it is a fertile valley, and it has mountains to the east (to which former occupants of the valley fled). 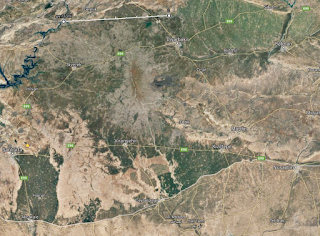 Excerpt from The Urantia Book:

When Adam elected to leave the first garden to the Nodites unopposed, he and his followers could not go west, for the Edenites had no boats suitable for such a marine adventure. They could not go north; the northern Nodites were already on the march toward Eden. They feared to go south; the hills of that region were infested with hostile tribes. The only way open was to the east, and so they journeyed eastward toward the then pleasant regions between the Tigris and Euphrates rivers. And many of those who were left behind later journeyed eastward to join the Adamites in their new valley home.

Cain and Sansa were both born before the Adamic caravan had reached its destination between the rivers in Mesopotamia. Laotta, the mother of Sansa, perished at the birth of her daughter; Eve suffered much but survived, owing to superior strength. Eve took Sansa, the child of Laotta, to her bosom, and she was reared along with Cain. Sansa grew up to be a woman of great ability. She became the wife of Sargan, the chief of the northern blue races, and contributed to the advancement of the blue men of those times.

It required almost a full year for the caravan of Adam to reach the Euphrates River. Finding it in flood tide, they remained camped on the plains west of the stream almost six weeks before they made their way across to the land between the rivers which was to become the second garden.

When word had reached the dwellers in the land of the second garden that the king and high priest of the Garden of Eden was marching on them, they had fled in haste to the eastern mountains. Adam found all of the desired territory vacated when he arrived. And here in this new location Adam and his helpers set themselves to work to build new homes and establish a new center of culture and religion.

This site was known to Adam as one of the three original selections of the committee assigned to choose possible locations for the Garden proposed by Van and Amadon. The two rivers themselves were a good natural defense in those days, and a short way north of the second garden the Euphrates and Tigris came close together so that a defense wall extending fifty-six miles could be built for the protection of the territory to the south and between the rivers.

After getting settled in the new Eden, it became necessary to adopt crude methods of living; it seemed entirely true that the ground had been cursed. Nature was once again taking its course. Now were the Adamites compelled

Page 848 to wrest a living from unprepared soil and to cope with the realities of life in the face of the natural hostilities and incompatibilities of mortal existence. They found the first garden partially prepared for them, but the second had to be created by the labor of their own hands and in the "sweat of their faces."
--
 Bob Hurt Signature
Posted by Bob Hurt at 12:41 AM No comments:

I'll See You In My Dreams