Busted by Twitter for calling Kyle Rittenhouse a Hero and Martyr

You see, I tweeted what you see below, whereupon one of Twitter's myriad leftist, limp-wristed, lame-brained, panty-waist, dilettante, hypocritical censor twits reacted in rancor, thusly: 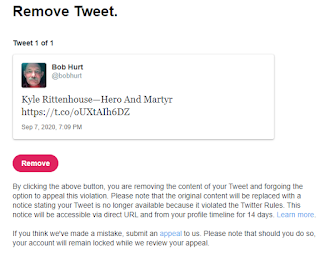 My tweet was innocuous, and I'm not that much of a pushover, so I opted to appeal... 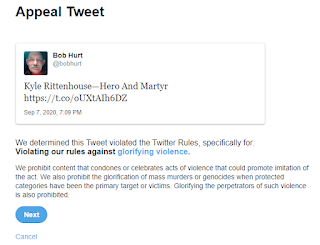 I responded by explaining that Kyle gave first aid to victims of terrorists who then attacked Kyle and got shot in self-defense, and now leftists are prosecuting him.

Implicitly, that makes Kyle both hero and martyr.  And note that my tweet did not glorify serial killing or violence.

Let the reader be the judge 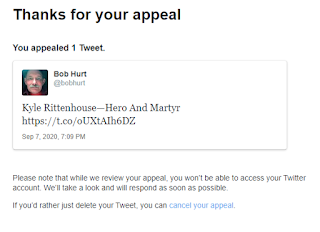 A few minutes later I get this email from Twitter:

Twitter's censors obviously love Marxist terrorists who are doing their best to destroy America, and HATE anyone who puts up an effective defense (such as by killing terrorist attackers who badly need killing).  They thought Kyle Rittenhouse would cave in like nearly everybody else does in response to their onslaught, and they could beat him down and leave him bleeding, broken, and dead in the street.

What a surprise they received instead!  Kyle shot three of them, two of them died, and the third had already drawn his pistol with intent to kill Kyle.  Kyle's actions of giving first aid, protecting others' property, and defending himself seem heroic to me.  He became a martyr for having to face prosecution for murder.  Those who censor Kyle for shooting his attackers in self-defense would change their opinion if terrorists attacked them with intent to kill.

ABOUT RENOUNCING U.S. CITIZENSHIP.
David Lester Straight seems sincere, well-meaning and acts as if he believes what he says about the law and government. But, he has a number of misconceptions about the law and government. So, he is misleading his followers.
Straight recommends using his form "affidavit" to renounce U.S. citizenship which he claims will render a person exempt from the application of U.S. laws, U.S. tax obligations and U.S. financial obligations. Straight does not know that his affidavit alone will not work to renounce U.S. citizenship in the first place and would not operate to absolve a person of U.S. law, U.S. tax obligations and U.S. financial obligations even if it did work to renounce U.S. citizenship..
In "IN RE YUSKA, Bankr. Court, Iowa 2017", the court held, " [The affiant's] attempt to unilaterally declare himself free of citizenship and its responsibilities WAS ... INEFFECTIVE. HE CANNOT CONTINUE TO RESIDE HERE IN THE UNITED STATES AND CONTINUE TO ENJOY THE BENEFITS OF CITIZENSHIP WHILE SIMULTANEOUSLY CLAIMING HE IS NOT A U.S. CITIZEN. 8 U.S.C. § 1481 (setting forth the ways a citizen may renounce citizenship). AN AFFIDAVIT PURPORTING TO RENOUNCE CITIZENSHIP IS NOT EFFECTIVE UNDER 8 U.S.C. § 1481, because, among other things, "A THRESHOLD REQUIREMENT UNDER THESE PROCEDURES IS THAT THE CITIZEN BE OUTSIDE THE BORDERS OF THE UNITED STATES in order for his renunciation to take effect." Duncan v. U.S. Dep't of State, No. 7:08-CV-00564, 2008 WL 4821323, at *1-2 (W.D. Va. Oct. 30, 2008)." See the last 6 full paragraphs here. https://scholar.google.com/scholar_case?case=15933401354161493454&q=yuska+2017+iowa+%22He+cannot+continue+to+reside+here%22&hl=en&as_sdt=40003
Further, the law applies exactly the same to citizens as non-citizens, state citizens or non-state citizens, U.S. citizens or non-U.S. citizens, legal aliens and illegal aliens. Status changes nothing whatsoever. Travel.state.gov puts it this way, "Persons who wish to renounce U.S. citizenship should be aware of the fact that renunciation of U.S. citizenship MAY HAVE NO EFFECT ON THEIR U.S. TAX OR MILITARY SERVICE OBLIGATIONS (contact the Internal Revenue Service or U.S. Selective Service for more information). In addition, THE ACT OF RENOUNCING U.S. CITIZENSHIP DOES NOT ALLOW PERSONS TO AVOID POSSIBLE PROSECUTION FOR CRIMES WHICH THEY MAY HAVE COMMITTED OR MAY COMMIT IN THE FUTURE WHICH VIOLATE U.S. LAW, or escape the repayment of financial obligations, including child support payments, previously incurred in the United States or incurred as United States citizens abroad.". https://travel.state.gov/content/travel/en/legal/travel-legal-considerations/us-citizenship/Renunciation-US-Nationality-Abroad.html. So, there is no advantage in attempting to renounce U.S. citizenship whatsoever.
More importantly, Straight has fabricated at least part, if not all of his his background, credentials (former special forces, former secret service, former deputy sheriff, member of presidential task force, gets people out prison, etc.) and all of his legal alleged victories (personally recovered 250 children wrongfully kidnapped by the CPS and responsible for drafting the paperwork that resulted in 800 court victories, referring to his worthless affidavit). So, not only do we have a competence problem, we also have a character and integrity problem. Straight has a lot in common with other amateur legal theorists who make similar claims below.
For the hoaxes of ROD CLASS (who has LOST 77 consecutive cases in a row), click here
.http://projectavalon.net/forum4/showthread.php?99447-Rod-Class-his-many-hoaxes
For the hoaxes of EDDIE CRAIG (who has LOST every case in which he has ever been involved), click here.
http://projectavalon.net/forum4/showthread.php?99564-Eddie-Craig-the-former-deputy-sheriff-hoax
For the hoaxes of ANTHONY WILLIAMS (who has LOST 90+ consecutive cases in a row), click here.
https://www.waccobb.net/forums/showthread.php?132863-The-Anthony-Williams-Hoax-(Anthony-Troy-Williams)&p=231850#post231850
For the hoaxes of CARL MILLER (who has LOST 28 consecutive cases in a row), click here
.https://www.waccobb.net/forums/showthread.php?131638-Carl-Miller-Richard-Champion
For the hoaxes of DEBRA JONES (who have never won or lost a single case), click here
.https://www.waccobb.net/forums/showthread.php?132369-Debra-Jones-amp-quot-The-Debra-Jones-Hoax-quot&highlight=Debra+Jones&p=230352#post230352;\
For the hoaxes of DEBORAH TAVARES (who has never won or lost a single case), click here.
https://www.waccobb.net/forums/showthread.php?130336-The-hoaxes-of-deborah-tavares-(conspiracy-weaponized-weather-fires-depopulation)&p=226016#post226016

Micro-serrations on one blade firmly grip fabric/cord during the cut; the other non-serrated blade allows sharpening.


Greetings,
This morning I posted on my Blog, Amos Probos, an interesting (I think) and relevant (I hope) story about when Joe Biden and I crossed paths.  Let me know if you have any questions, comments or concerns. Here is the text of my post:
I have been trying since late last year to get the Delaware Office of the Prothonotary to release public records related to a criminal case which may well bear upon the fitness of Joe Biden to be President. However, if you are looking for a 280-characters explanation of the importance of the Prothonotary's refusal to produce the requested documents, you won't find it here as this is a complicated story.  Let's go to the timeline:

In the Fall of 2007, my client Larry Sinclair accused then-Presidential candidate Barack Obama of engaging with him in drug use and homosexual acts. Shortly after that accusation, Larry began to exchange Text Messages regarding Obama with Donald Young, who was the Choir Director at The Rev. Jeremiah Wright Junior's Trinity United Church of Christ. This is the Church where then-Presidential hopeful Barack Obama was baptized, married and was a long-time member. On December 23, 2007, Donald Young was found executed in his Chicago apartment.

In Mid-January 2008, Larry posted a video on YouTube regarding his specific allegations of sex and drug use with Obama.

On February 8, 2008, the Attorney General of Delaware (and the late son of Joe Biden), Beau Biden, filed an Indictment against Larry charging theft of less than $1,000 and, anomalously, for an extradition warrant.

In Early-March 2008, Larry contacted me as he was afraid for his life as a result of the Donald Young "assassination" and for advice on what to do as he was receiving death threats. To protect Larry, we: (i) filed a federal lawsuit against the anonymous blogger "Oswaldo" threatening Larry and (ii) organized a rather bizarre press conference on June 18, 2008, at the National Press Club which is still on YouTube. The goals were to push back against those threatening Larry and also make a buffoon out of him so he would be relegated to a dustbin of history and no longer a threat to the Obama/Biden ticket. The strategy worked. The FBI identified the person making threats against Larry and me but refused to identify either him or the U.S. Attorney who told the the FBI not to tell us his identity.

Immediately after the June 18, 2008 Press Conference and while still at the National Press Club, Larry was arrested on the Delaware warrant and subsequently extradited to Delaware on June 23, 2008. According to the Docket, on August 28, 2008, Beau Biden filed a "nolle prosequi" or dismissal of the criminal case against Larry citing to the Court: "Insufficient Evidence".

In December 2019, I ordered the actual file of Larry's Delaware Criminal case and paid to have it retrieved from the Delaware Clerk's storage.  The Prothonotary of Delaware has refused to produce the file for my review despite my repeated requests. I believe that file will demonstrate that there was no evidence in support of the Delaware Warrant but rather it was a way for the Bidens to shut Larry up until after the election. It worked.

The circumstances surrounding Larry's indictment, arrest and the subsequent dismissal of the criminal charges against him for lack of evidence six months later by Beau Biden's office speak clearly to me of the heavy hand of Joe Biden utilizing the criminal justice system to silence an existential threat to Obama and by extension, to Joe Biden himself.

I don't know if Larry was telling the truth or not, nor do I particularly care if Barack Obama is gay and/or an addict; that is not the issue here. I do know and care that Joe Biden apparently had my client falsely arrested for making those accusations. Like so many in Washington D.C., Joe Biden has come to believe that if his has the "power" then whatever he does with it is "right". This is antithetical to our Nation's Founder's beliefs and significant sacrifices to achieve dominance for the rule-of-law that "what is right" flows from objective and agreed-upon sources of right and wrong, not from the possession of power alone.

For this reason, I do not believe Joe Biden is fit to be President of the United States of America because apparently to him the ends justify whatever means are used to obtain them. While I will admit to certain reservations about Donald Trump, in weighing the risks each man poses to the well-being of the United States of America, there is no question in my mind that Joe Biden is simply too morally untenanted to be a four-year tenant in the most powerful Chair in the World.