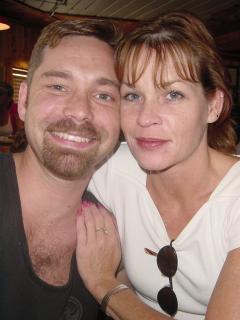 The photo shows my son Robert M Hurt III and Linda McIntire when they came from Virginia Beach to visit me and Maria in Clearwater Florida in June 2002. I'm writing to talk a little about Robby . He died at 10:45PM on 13 October 2005.

For the past several years, Robby had been an excellent foreign car salesman. He did his best to be a good and loving father to Kayla, Jenny, and Kristen. He is the type of man people like to love. He was outgoing, cheerful, gentle, and affable. He had a great sense of humor, was a good cook, and a sentient romanticist.

Late in 2004, Robby contracted pneumonia and just couldn't seem to shake it off for 5 months or more. Eventually, he was hospitalized and given antibiotics and rest, after which he returned home to recuperate. His problems began to mount, so he went back into the hospital for testing. The doctors concluded he had liver problems, and he was looking jaundiced. The medication they gave him didn't seem to work. Then they discovered he had a staphylococcus infection in his blood. They treated it with antibiotics, and he went back home to recuperate. His condition worsened, so he returned to the hospital for more diagnostics. The doctor found that he had a hole in his heart, but decided not to operate. Then, Robby suffered a stroke. A few days ago he began to bleed uncontrollably from the nose. On Tuesday, he suffered a violent epileptic seizure, even though he has no history of such seizures. The doctor performed a procedure to restrict blood flow to his nose so the bleeding would stop. Then the doctor informed Cheryl that Robby's liver was failing badly.

Cheryl did not believe Robby would live long. On his last day, he was sedated, on a respirator, and unable to answer phone calls. The only thing that could be done for him was to pray for a quick end to his suffering. He had requested not to have his life prolonged artificially, and Cheryl so ordered the doctor. Cheryl called to talk with me about it, and I agreed with her.

Cheryl and I shall not be alone in missing Robby. Nearly everybody who ever met him loves him, and he will be sorely missed. Robert M. Hurt III is survived by brothers and sisters Norman, Keith, Wendy, and Lorrie. As for me and Maria, we are facing our grief over the loss, knowing we do not feel it nearly as acutely as those who have witnessed his waning vitality. I am consoled in the knowledge that Robby's suffering has ended, and that he is passing through a period of rest to awaken in a new spiritual life where he is loved and able to love, and can enjoy the eternal adventure of coming to know, love, and be like God. He would wish that everyone could celebrate his entering the next phase of his spiritual existence.

This gentleman wrote his name as Robbie, Rob, or Robert. NOT Robby. Bob Hurt, at least try to get that right.