New Wooden Stake to Hammer into the Vampire Hearts of Bankers 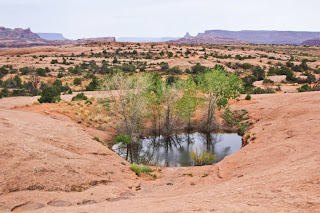 Mortgagors have a new gun to hold to the heads of bankers insisting on foreclosure after intentionally destroying jobs, housing values, and homeowner equities, and driving mortgagors into foreclosure:  Proof of the master plan of global bankers to crush economies (see article below).

Naturally, they continue their loan modification charade of helping borrowers by balking when  borrowers request the loan mod, and then telling them the borrower must default on 3 payments in order to qualify for the loan mod.  They borrower who takes that advice breaches the terms of the note and precipitates an foreclosure action by the owner of beneficial interest in the note, or the owner's agent.  Several victims of that con have contacted me in the past several months for help.  I always suggest they find reasons in the mortgage itself to sue the lender, for only that wills top the foreclosure and win financial benefits, until the courts start punishing lenders for leading their mortgagors into foreclosure like a leading parched desert travelers to a poisoned well in an lush oasis.

Couple the memo at the core of the below article with the report from the 2010 Financial Crisis Inquiry Commission.  There you have a big wooden stake to drive into the heart of the banking industry, if enough people get behind the hammer.  I would serve judicial notice of them to every foreclosure judge and prepare a strong argument to say the bankers conceived, planned, and executed the destruction of western economies, and used predatory lending and securitization with their derivatives as the prime instruments.  Like surgeons, bankers and their minions have converted millions of individual family homes into THEIR property so they can either hold them till the market goes up and sell them at a huge profit, thereby pocketing the homeowner equity, or by renting them out and securitizing the rent flows.

The Roman legions could not possibly have done a better job of stealing private property and turning it over to their Caesar.  Bankers have made borrowers have become the serfs and slaves of modern western society.


The Confidential Memo at the Heart of the Global Financial Crisis 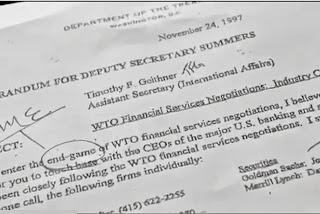 When a little birdie dropped the End Game memo through my window, its content was so explosive, so sick and plain evil, I just couldn't believe it.

The Memo confirmed every conspiracy freak’s fantasy: that in the late 1990s, the top US Treasury officials secretly conspired with a small cabal of banker big-shots to rip apart financial regulation across the planet. When you see 26.3 percent unemployment in Spain, desperation and hunger in Greece, riots in Indonesia and Detroit in bankruptcy, go back to this End Game memo, the genesis of the blood and tears.

The Treasury official playing the bankers’ secret End Game was Larry Summers. Today, Summers is Barack Obama’s leading choice for Chairman of the US Federal Reserve, the world’s central bank. If the confidential memo is authentic, then Summers shouldn’t be serving on the Fed, he should be serving hard time in some dungeon reserved for the criminally insane of the finance world.

The memo is authentic.

I had to fly to Geneva to get confirmation and wangle a meeting with the Secretary General of the World Trade Organisation,Pascal Lamy. Lamy, the Generalissimo of Globalisation, told me,

“The WTO was not created as some dark cabal of multinationals secretly cooking plots against the people... We don’t have cigar-smoking, rich, crazy bankers negotiating.”

Then I showed him the memo.

It begins with Larry Summers’ flunky, Timothy Geithner, reminding his boss to call the Bank bigshots to order their lobbyist armies to march:

“As we enter the end-game of the WTO financial services negotiations, I believe it would be a good idea for you to touch base with the CEOs…”

To avoid Summers having to call his office to get the phone numbers (which, under US law, would have to appear on public logs), Geithner listed the private lines of what were then the five most powerful CEOs on the planet. And here they are:

Lamy was right: They don’t smoke cigars. Go ahead and dial them. I did, and sure enough, got a cheery personal hello from Reed – cheery until I revealed I wasn't Larry Summers. (Note: The other numbers were swiftly disconnected. And Corzine can’t be reached while he faces criminal charges.)

It's not the little cabal of confabs held by Summers and the banksters that’s so troubling. The horror is in the purpose of the "end game” itself.

The year was 1997. US Treasury Secretary Robert Rubin was pushing hard to de-regulate banks. That required, first, repeal of theGlass-Steagall Act to dismantle the barrier between commercial banks and investment banks. It was like replacing bank vaults with roulette wheels.

Second, the banks wanted the right to play a new high-risk game: “derivatives trading”. JP Morgan alone would soon carry $88 trillion of these pseudo-securities on its books as “assets”.

But what was the use of turning US banks into derivatives casinos if money would flee to nations with safer banking laws?

The answer conceived by the Big Bank Five: eliminate controls on banks in every nation on the planet -- in one single move. It was as brilliant as it was insanely dangerous.

How could they pull off this mad caper? The bankers' and Summers' game was to use the Financial Services Agreement (or FSA), an abstruse and benign addendum to the international trade agreements policed by the World Trade Organisation.

Until the bankers began their play, the WTO agreements dealt simply with trade in goods – that is, my cars for your bananas. The new rules devised by Summers and the banks would force all nations to accept trade in "bads" – toxic assets like financial derivatives.

Until the bankers’ re-draft of the FSA, each nation controlled and chartered the banks within their own borders. The new rules of the game would force every nation to open their markets to Citibank, JP Morgan and their derivatives “products”.

And all 156 nations in the WTO would have to smash down their own Glass-Steagall divisions between commercial savings banks and the investment banks that gamble with derivatives.

The job of turning the FSA into the bankers’ battering ram was given to Geithner, who was named Ambassador to the World Trade Organisation.

Why in the world would any nation agree to let its banking system be boarded and seized by financial pirates like JP Morgan?

The answer, in the case of Ecuador, was bananas. Ecuador was truly a banana republic. The yellow fruit was that nation’s life-and-death source of hard currency. If it refused to sign the new FSA, Ecuador could feed its bananas to the monkeys and go back into bankruptcy. Ecuador signed.

And so on – with every single nation bullied into signing.

Every nation but one, I should say. Brazil’s new President, Inacio Lula da Silva, refused. In retaliation, Brazil was threatened with a virtual embargo of its products by the European Union's Trade Commissioner, one Peter Mandelson, according to another confidential memo I got my hands on. But Lula’s refusenik stance paid off for Brazil which, alone among Western nations, survived and thrived during the 2007-9 bank crisis.

China signed – but got its pound of flesh in return. It opened its banking sector a crack in return for access and control of the US auto parts and other markets. (Swiftly, two million US jobs shifted to China.)

The new FSA pulled the lid off the Pandora’s box of worldwide derivatives trade. Among the notorious transactions legalised: Goldman Sachs (where Treasury Secretary Rubin had been co-chairman) worked a secret euro-derivatives swap with Greece which, ultimately, destroyed that nation. Ecuador, its own banking sector de-regulated and demolished, exploded into riots. Argentina had to sell off its oil companies (to the Spanish) and water systems (to Enron) while its teachers hunted for food in garbage cans. Then, Bankers Gone Wild in the Eurozone dove head-first into derivatives pools without knowing how to swim – and the continent is now being sold off in tiny, cheap pieces to Germany.

Of course, it was not just threats that sold the FSA, but temptation as well. After all, every evil starts with one bite of an apple offered by a snake. The apple: the gleaming piles of lucre hidden in the FSA for local elites. The snake was named Larry.

Does all this evil and pain flow from a single memo? Of course not: the evil was The Game itself, as played by the banker clique. The memo only revealed their game-plan for checkmate.

And the memo reveals a lot about Summers and Obama.

While billions of sorry souls are still hurting from worldwide banker-made disaster, Rubin and Summers didn’t do too badly. Rubin’s deregulation of banks had permitted the creation of a financial monstrosity called “Citigroup”. Within weeks of leaving office, Rubin was named director, then Chairman of Citigroup – which went bankrupt while managing to pay Rubin a total of $126 million.

Then Rubin took on another post: as key campaign benefactor to a young State Senator, Barack Obama. Only days after his election as President, Obama, at Rubin’s insistence, gave Summers the odd post of US “Economics Tsar” and made Geithner his Tsarina (that is, Secretary of Treasury). In 2010, Summers gave up his royalist robes to return to “consulting” for Citibank and other creatures of bank deregulation whose payments have raised Summers’ net worth by $31 million since the “end-game” memo.

That Obama would, at Robert Rubin’s demand, now choose Summers to run the Federal Reserve Board means that, unfortunately, we are far from the end of the game.

Special thanks to expert Mary Bottari of Bankster USA www.BanksterUSA.org without whom our investigation could not have begun.

The film of my meeting with WTO chief Lamy was originally created for Ring of Fire, hosted by Mike Papantonio and Robert F. Kennedy Jr.

Further discussion of the documents I laid before Lamy can be found in “The Generalissimo of Globalization,” Chapter 12 of Vultures’ Picnic by Greg Palast (Constable Robinson 2012).

Some Credible Scientists Believe Humanity Is Verrrrrry Close to Destruction

Psytrance Rave in a Forest

Private Landlords Taught Me How to Get Rich Exploiting the Poor

By Greg Palast 1 day ago

Great post!!Thanks for sharing it with us....really needed.New Jersey law allows a lender to obtain a "deficiency judgment" for the balance of what you owe after selling your house at the foreclosure sale.Foreclosure attorney NJ