Dialogue with A Yellow Dog Democrat

Dialogue with A Yellow Dog Democrat

I recall engaging in a political dialogue with my next younger brother about 40 years ago.

There we see the logic of the traditional "Yellow Dog Democrat" ("YDD")  Brother Durull would vote for a yellow dog Democrat before he'd vote for any human Republican, etc.

The Fraudulent Denigration of Romney over Bain Choices

IMO, it would not matter whether Bain sucked the life out of corporations and left their corpses to rot in the sun, or whether that happened under the control of Mitt Romney or any other CEO.  That's business.  Get used to it.  Owners of a corporation don't owe jobs to society.  They owe dividends and increasing stock value to shareholders, they owe taxes to government, and they hire people like Soptic's wife ONLY for that purpose.  I guess Soptic didn't understand that, just like he doesn't have a clue about the ideals of good government.  And he probably loved Dubyuh's Democrat-like idea that "Every family owns their own home," like FDR's "chicken in every pot" mantra.  No corporation or government  owes that to the people of the land.  The people owe it to government and society to go get a job, pay their way through life, and pay their taxes.  And with that job money they buy stuff from corporations who hire people as needed to make and deliver the stuff.

Does anyone see the courts across America going after the banks that lent mortgage money to people they knew could not repay them, thereby collapsing homeowner equities and creating massive job loss?  Do courts routinely order cram-downs to make the mortgagees   shoulder the brunt of homeowner equity loss the way they should?  Didn't that predatory lending nonsense skyrocket on Dubyuh's watch?  (see the FCIC Report for info).  If the permanent-fixture judges of American courts don't attack lending corporations for making bad-faith loans and ruining property values, why should a fly-by-night presidential candidate? 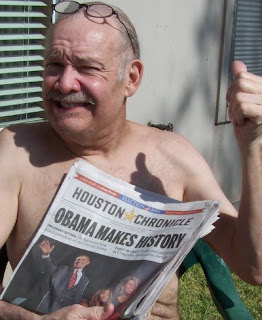 What Yellow Dog Democrats Do

Brother Durull enjoys more perspicacity than most.  That matters little at campaign or election time.  He's a Yellow Dog Democrat to the core.  So, he'll Always vote ONLY for the Democrat candidate for President, even if the candidate is a closet communist, socialist, Muslim-disguised-as-renegade-Christian, identity thief, British non-natural-born US citizen operating with a fake name, fake birth certificate, fake citizenship, fake college background, fake selective service number, and numerous  fake social security numbers - in other words, the closest thing to a "Yellow Dog" that any human being can become.

And, a hundred million more YDD's will vote the same.

Because they fear what will happen if someone other than their political party candidate becomes President.  The party hierarchy makes sure to infect the rank and file party members with this sense of fear out of some presumed ideology which few understand.  In reality, most of the party hierarchy wants to secure favors from the new administration.  The rank and file get no such benefits, so why do they care who wins?  And they get their candidates to promise whatever handouts will garner votes.  They do it by making people fear the other candidate.

The Line in the Political Sand

In my mind the parties ought to have differently drawn lines of political philosophy in the sand.  The line should separate sanity from insanity.  It should keep government in its box, bind it with the chains of our constitution, sensibly interpreted of course.  Government must protect its territory from invasion and its people from injustice, it must not impose unjust taxes, not saddle the people with monumental debt, not rob from one set of people so as to bestow largess upon another set, and not waste the public money on trifles inside or outside of the country.    It should not allow universal one-person-one-vote suffrage because only honorable, educated, intelligent, productive people should have the right to vote, or the right to a heavily-weighted vote. And it should not prevent its electors from arming themselves against or prosecuting enemies in or out of government.  The parties should dispute only over the means of accomplishing these ideals, not over whether the ideals constitute actual ideals.

I personally believe the largest part of America's political problem comes from two central factor that could lead to its eventual demise as a force for advancing civilization:

Unfortunately, people in the above two groups will not solve the problem that politicians don't properly draw the proper line in the political sand.  Because of the "give me a handout" pressure of and by the above two groups, politicians set the line directly in the sand of assumption that government owes derelicts and ne'er-do-wells a living.

Applying the Gospel to the Problem.

Smart people of good upbringing will eventually desire to grow to become like God - to become relatively perfect, ethically, morally, physically, spiritually, mentally, and all other respects.  In case anybody wondered, personal perfection was the third tenet, after focus on the fatherhood of God and brotherhood of Man, of the Gospel of the Kingdom of God which Jesus of Nazareth spent his 4-year public ministry teaching all who would listen.  Such people as adhere to those ideals of human living will become quite liberal in their personal lives, but conservative in their expressions through government.  Charity will start at home, not at the public, permanent, government-sponsored feeding trough.

By breeding and importing hordes of low-intelligence people America essentially clips the wings of its fledglings so they will never fly right if they fly at all.  I estimate that about 25% of people in the US haven't the cognitive ability to graduate from high school.  They should not vote at all because they cannot manage their own lives.  Democrats encourage the sealing of our nations' doom by dragging the feckless to the polls and by telling them to vote for the Democrat candidate.

I knew these principles 43 years ago when I joined the John Birch Society and started learning about the factors of political chicanery that force America leftward, inexorably, year-by-year, against the ideals of its founders.

Also back then, I started engaging in political dialogue with Brother Durull and trying against fact, logic, and common sense to navigate his circuitous, fallacious sophistries.  I engage no longer.  You just cannot reason with a Yellow Dog Democrat.  They have never managed to understand that man becomes his brother's keeper only through personal contribution to the needy, not by engineering a government regime to rob from the haves and give to the have-nots in a spurious effort to make everybody equal.


[Note:  the author has no political party affiliation.  Brother Durull doesn't believe this, of course.]