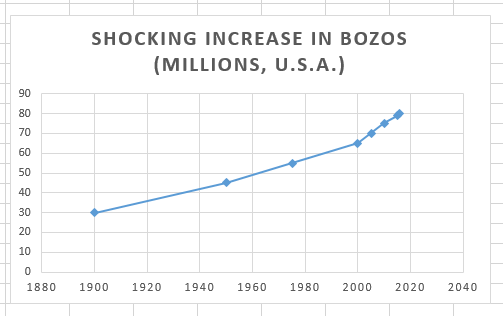 The USA's clinically stupid have IQ below 85 and lack the cognitive ability to graduate from a 1950's vintage high school.  This genetic affliction actually has a criminal aspect for two reasons:
Sadly, no law prohibits the stupid from having a say in government.  It stands to reason that immigrating and procreating the stupid without restraint will eventually make the stupid the majority of voters.  They will reliably vote stupidly to elect demagogues and corrupt politicians who will rob from productive people in order to give various forms of welfare to the stupid, essentially making the productive the slaves of the non-productive.

The average IQ of USA racial groups:
The approximate numbers of stupid people
The fastest growing racial groups:
These facts portend an even more shocking increase in USA Bozos in the years to come, because of open borders, civilizationally suicidal quotas allowing the wrong people to immigrate, ridiculous welfare benefits for the stupid without imposition of any test or responsibility, and unrestrained procreation of and by the stupid out of wedlock.

To fix this, we need:
Demand these changes from your legislators under penalty of excision from Government... UNLESS you want to witness a further SHOCKING INCREASE IN BOZOS.