The Roll of ISIS in the West

Let me begin by observing that for thousands of years largely unseen spiritual forces in charge of this planet have seen fit to interfere in the mess man made of the advancement of civilization. Man had largely failed to bring alive and keep alive the light of spiritual truth. Man had worshiped idols, volcanoes, and a multiplicity of Gods, losing all personal intimacy with deity. Man had murdered, conquered, enslaved, and abused fellow humans simply because he could get away with it.

To fix this, the unseen spiritual hierarchy of planetary and universe government sent seers, prophets, and revelators to wake up the people and get them back on track. The Bible records some of them. Other books like the Bhagavad-Gita, Book of Mormon, Qur’an, and Urantia Book record putative others. Yet others have gone somewhat less recorded, but have become nonetheless vibrant with followers.

Allow me to remind you of at least a few serious incidents of revelation:


Pay particular attention to the revelation to Muhammad. According to the Qur’an and other writings, Muhammad received a revelation from the angel Gabriel in the form of a message from God, and because of his illiteracy, he recited it to a scribe. Much of his recital has survived in the form of the Holy Qur’an.

Islam means submission to God; Muslim means one who submits to God. He propounded 5 pillars to his new monotheist religion:

The so-called Hadith of Gabriel, an Islamic holy writing, spells out the five pillars, plus the six articles of faith (spiritually motivated living), plus doing what is “beautiful.”

How do we know the Qur’an accurately reflects the Muhammad recital?  We do not.  However, many listeners over a period of years heard his recitals, and the rather universal Qur'an consists of whatever remains from the generally agreed sayings of Muhammad as delivered by Gabriel. Scribes have recorded his commentary in the Sira and Hadiths, collectively the Sunna, and those generally guide Muslims in their interpretation and application of the Qur'an.

We cannot know what Gabriel said to Muhammad, or whether Gabriel or some other personage said it, or whether Muhammad dreamed it up, or whether the Qur’an came from the scrivener rather than Muhammad.

However, few can doubt the goodness of acknowledging the existence of one God (GOD), worshiping him through daily prayer, and giving alms to the poor, widows, and orphans.

Some may wonder whether Muhammad saw himself as the only prophet, in effect the only reliable messenger of divine revelation.  A bit of study of Islam’s roots will reveal that he did not.

Muhammad acknowledged numerous prophets from the Torah, and acknowledged Jesus as a prophet and the spiritual offspring of God and the ultimate judge at judgment day, and his gospel as something folks ought to heed. Islam clearly had Judeo-Christian roots.  In fact, it seems that Jesusonian missionaries from Philadelphia (Amman Jordan) contacted Muhammad, for he professed distinctly non-Catholic views about the nature of Jesus and Mary.

Muhammad recognized the difficulty of remaining loyal to his recital, so he admonished his followers to struggle inwardly against injustice and the temptation to do wrong. He referred to this struggle as “holy jihad.”

Against this magnificent backdrop of spiritual motivation, we have the murderous, torturous insanity of Islamic Terrorism, the effort to destroy EVERYTHING non-Muslim, and even fellow Muslims who don’t toe the line.

In dealing with this paradox, we simply MUST acknowledge that God’s spiritual agents probably sought out Muhammad to bring him this revelation during a time of abject darkness (the “dark ages of Christianity”) when the light of Jesus’ religious truth faced certain extinction, with only monks keeping it alive. But, NO SANE person can possibly believe God’s agents had Islamic Terrorism in mind.

We in the USA have seen in videos and photos the ISIS black flag with white Arabic script on it. I have symbolized it with the roll of black toilet paper in the photo below. Murderous men in black ninja outfits wave that horrid, evil flag around proudly, as though shoving its message up the bottoms of everyone else.

What does that script mean? Surely, it must mean “We will blow you up and cut your heads off, and slaughter you any way we can, regardless of anything, and nothing will stand in our way.” No, it does not mean that. It means this:

Regarding the words, I honor the monotheist message and Muhammad’s effort to bring it to a spiritually starved people.

Regarding the black ISIS flag, I drop mud on the iniquitous terrorism for which it stands, and the terrorist cowards who hide their terrorism behind a potentially benign religion the way a bully hides behind his mother’s skirt.

I need not say what I would do with the flag, given the chance.

Regarding my inclusion of The Urantia Book in the above list of major known revelations or advocates of spiritual awakening, some might wonder whether the “space aliens” sent here to correct errors in the bible also corrected errors in the Qur’an. 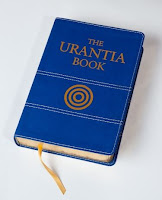 The Urantia Book has a less impeachable source than ANY source of revealed religion, EVER known to this world. All other sources have sketchy credentials and hundreds or thousands of years of opportunity for proponents and opponents to editorialize and mangle the teachings.

By contrast, the Urantia Foundation founders attended the sessions during which they indited or transcribed much of the book. Its teachings have the backing of scientific discoveries made since its inception. It has the distinction of delivery in modern American language, and it enjoys philosophic consistency from cover to cover.

On top of that, its religious teachings center on acknowledgement of the Fatherhood of God and Brotherhood of man. It propounds the divine obligation of all humans to demonstrate unselfish, loving service to one another while acknowledging the Universal Father as their spiritual father and eternal companion. No religious philosophy anywhere stands as exalted as that.

So yes, one or more of a diverse array of non-humans purport authorship of the 196 papers that comprise The Urantia Book. Some of the authors had once lived as humans on other worlds, and evolved into spiritual beings.  Some came into existence as spiritual beings.  Some earthbound "Midwayers" experienced birth on this world but remain invisible to most humans. Thus, the authors do not all hail from space (Heaven), and some have enjoyed “native” (not alien) status on this world for many thousands of years.  And the authors definitely are Heavenly beings.

Anyway, the original text of The Urantia Book has a glaring difference from all previous written revelations or holy books. Non-humans authored it and then supervised the editorial process that produced the published book as a philosophically consistent, scientifically accurate (for the most part) masterpiece of American Language literature. If you read its 2097 pages, you might decide it did not come from "space aliens," unless, of course, you consider God and his Angels aliens.

The Urantia Book contains much information that no other single work contains, it refutes some of the errors in the Bible relevant to the mission of The Urantia teachings, and it does not address the Qur'an at all, although its teachings differ measurably from precepts in the Qur’an.

For example, the Qur’an teaches that God has no children and man is God’s subject and man had better obey him or suffer eternal damnation in hell.  By contrast, The Urantia Book teaches that God is man’s ultimate father, and that man is his beloved child, destined to grow to become like God through discerning and devotedly doing his will, and thereafter to become the Father’s companion in untold adventures in the eternal reaches of space and time.

The Urantia Book devotes the last third of its pages to the Life and Teachings of Jesus. A “Midwayer” Commission authored the related papers because they actually witnessed the life of Jesus. You can read the book online at http://urantia.org or http://urantiabook.org.
# # #